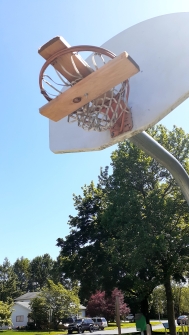 Last month I went to small park in Allentown to shoot some hoops, but someone had screwed two pieces of wood together on the basketball rims to stop people from playing.

I knew or at least I heard, they were closing parks in town because of the Coronavirus, but I had no idea they were  going to stop people from shooting around.  That seemed a little extreme.

I wasn’t too angry, but I thought it was messed up that the golf courses were open and not the courts.  Before I got to the courts I passed a golf course, and I saw people having a great time.  They were laughing, slapping each other five, and calling shotgun for passenger golf cart rides.  At a time when everyone was in panic because of the virus, it appeared like everything was back to normal.  Then I arrived at the park, and I’m like what the heck is this!  Lock down!

I was told the small park and the attached courts were finally reopened last week, but I went there today to see for myself.  Sometimes you just have to see things for yourself, but sure enough, the park was open and the crucifix was removed from the basketball rim.  There was even some young man shooting around and children playing on the swings.  It  was a normal day at the park, and it appears Allentown is finally returning.

Here’s something really cool I haven’t seen before.  In the park there’s a little green house containing books.  So if you’re ever at the park and you would like to just have a seat on the bench and read a book, there are several on hand.

If you want to bring your kids to the park and have a story time, you can do that also.  I’m like really promoting this park for some reason, lol, but in all seriousness, it’s a pretty cool low key place, and it’s right in town!

Alright Everyone, Have a Wonderful Day!

I'm an aspiring teacher, but a writer at heart. I love football, Atlantis, and the Arts. Table Seven is my piece of the web, and I write about things I like, things I dislike, and things I think people should know about. View all posts by Frank LaManna